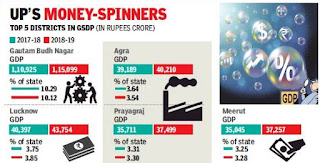 The state’s latest district gross domestic product figures released by UP government reveal massive economic disparities among various districts in the state, calling for swift corrective action at a time when the aim is to make UP a one trillion dollar economy.

Noida retains first position among all districts, accounting for 10.12% of the state’s GDP, despite registering a slight drop of 0.17% since 2017-18. Lucknow, which is second behind Noida, contributes 3.85% of state GDP, even though it lags at less than 40% of Noida’s figures.

Chief minister Yogi Adityanath blamed previous governments for the wide economic disparity while adding that UP’s per capita income was highest in the country after independence, but had fallen much below the national average when he became CM.

Two districts — Chitrakoot and Mahoba — cry for attention while registering a fall both in GDP and per capita income.

The share of various regions to state GDP has remained almost constant, once again emphasizing a wide chasm between the developed and underdeveloped expanses of the state. While west UP accounts for 51.71% of state GDP, the lagging Bundelkhand accounts for just 5.22%, though it has risen from 4.95% bringing some solace to the government.

Arvind Kumar Pandey, director finance and statistics, in his introduction to the report, said limited statistics available with the government made it difficult to assess the actual economic condition of a district, though computing per capita income was possible.

A senior official in planning department said states like Andhra Pradesh and Maharashtra have also been calculating district GDP and UP would have to collect more data in a more systematic way for more accurate information.

“Uttar Pradesh is going to use sustainable development goals to identify the indicators on which to calculate GDP, and not restrict itself to just economic factors,” the official said.