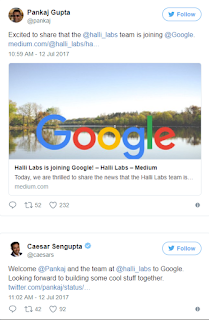 In a fresh impetus to its artificial intelligence dreams, Google has acquired Bangalore-based start-up Halli Labs. Halli, which means “village“ in Kannada, announced the news in a blog post, which was later confirmed by Google. “Welcome Pankaj and the team at Halli Labs to Google. Looking forward to building some cool stuff together,“ tweeted Google's vice president of product management, Caesar Sengupta.

Founded by Pankaj Gupta, the start-up is focused on building deep learning and machine learning systems. “We are thrilled to share the news that the Halli Labs team is joining Google,“ the firm said in a blog post. “Halli Labs was founded with the goal of applying modern artificial intelligence and machine learning techniques to old problems and domains in order to help technology enable people to do whatever it is that they want to do, easier and better,“ the post added.

According to TechCrunch, Gupta is a data scientist with an interesting history that includes running recommendation and personalisation at Twitter, and a role as CTO at now-defunct Indian Airbnb rival Stayzilla, among other entrepreneurial ventures. “Well, what better place than Google to help us achieve this goal. We will be joining Google's `Next Billion Users' team to help get more technology and information into more people's hands around the world. We couldn't be more excited,“ wrote the Halli Labs team.

“We are excited that the Halli Labs team is joining Google. They'll be joining our team that is focused on building products that are designed for the next billion users coming online, particularly in India,“ Google said.