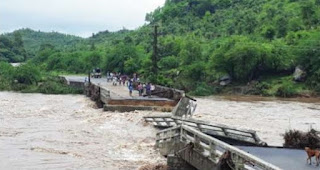 Incessant rain since July 21 night has created a history of sorts in Mount Abu with the hill station plundered by as much as 110 inches rainfall in just four days. This is the highest rainfall received in Mount Abu in the last several decades.

Heavy rain sent rocks hurtling down near Aana Hanuman, 6 km from the entry toll booth. But local authorities cleared the hurdles in few hours. Officials also scotched rumours about Abu Road-Mount Abu being closed for vehicles and said they have only asked the drivers to exercise caution, especially after 6 pm due to possibilities of rocks falling from the height.

While there has been no major casualty in Abu, internet broadband connectivity of BSNL and other private telecom operators has been badly hit. Vodafone and Airtel have managed to partially restore services but services of BSNL remain hampered.

Supply of essentials including vegetables too has been hit due to flood-like situation in adjoining places like Pali, Jhalore and other parts of Sirohi district.

All schools and colleges have been closed as per the collector's orders as a precautionary measure.