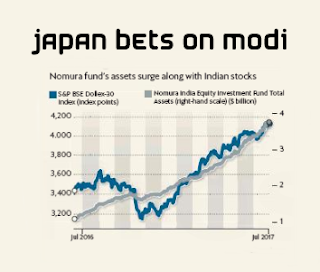 The land of Abenomics is betting on Modinomics. The demand is so strong that assets of Nomura Holdings Inc.’s India equity fund quadrupled to almost 400 billion yen ($3.6 billion) in just the past year. Japanese investors owned $13 billion of Indian stocks and bonds at the end of June, the most in data going back to 2012..

Investors are looking at where the growth will be in the medium to long term, without having to worry about shortterm swings in the market. India’s economy is expanding at about seven times the pace of Japan’s, buoyed by a burgeoning middle class and more one than million young people joining the labour force every month. Indian shares have hit multiple records this year amid optimism about Prime Minister Narendra Modi’s policies.

India is what money managers have begun to call a “consensus trade”, meaning almost every fund is bullish. Global and local funds have pumped about $16 billion into its stock market this year alone, making the S&P BSE Sensex one of the world’s top performers in 2017 and sending the rupee up 5.6% against the dollar.

The combined assets of three India funds run by Nissay Asset Management Corp. have topped 100 billion yen since their launch 2015. Nissay is a unit of Nippon Life.

And it’s not just Japanese individuals who have the India bug. For Franklin Templeton’s Michael Hasenstab, “unprecedented” structural reforms by Modi and relatively high yields make India a “sweet spot” among emerging markets. On 1 July, India introduced a goods and services levy designed to unify the nation into a common market and widen the tax net.

Bryan Goh, Singapore-based chief investment officer for Bordier and Cie, said India today reminds him of Japan in 2013, after Prime Minister Shinzo Abe swept to power with widespread support for his plans to spur growth.