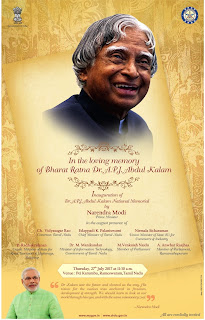 Under the Centre's Blue Revolution scheme, fishermen from the southern edge of the state's coastline will be able to venture far from land and overcome the difficulties of fishing in the Palk Strait, where the Sri Lankan navy has repeatedly detained them and confiscated their boats.

Modi said the Centre will extend loans and subsidies from an allocation of Rs.1,500 crore to allow these fishermen to convert their vessels into deep sea liners and acquire the gear required for expeditions far from the coastline. He also distributed letters of sanction to five select beneficiaries under the scheme.

Addressing a large crowd that had converged on Rameswaram from districts in sout hern Tamil Nadu on the second death anniversary of the former President, Modi said “the sacred land of Rameswaram had given Abdul Kalam“ to the country . To honour the legacy of Kalam, the country “will have developed in all walks of life“ when it celebrates its 75th Independence Day in 2022, he said, calling on the youth of the nation -so beloved to the scientist-turned-statesman -to “take an oath“ to achieve this.