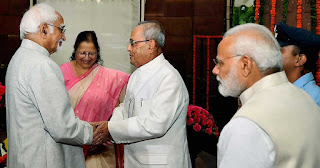 Outgoing President Pranab Mukherjee said the governments should avoid taking the ordinance route to promulgate a law it wants, and stressed that this option should be used only in “compelling circumstances.

The President, who demitted office on July 25, underlined that the Ordinance route should also not be taken in matters which have been introduced in Parliament or are being considered by a house committee.

The Narendra Modi government promulgated the Enemy Property Ordinance at least five times as the opposition was against some provisions of the law.

Mukherjee also remembered his “mentor“, former prime minister Indira Gandhi as a “towering personality“ in his last speech as the President of India.