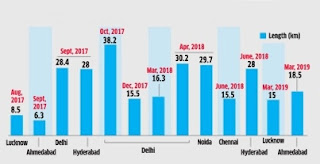 In a major fillip to urban transport, the Union government is all set to double the metro rail network over the next 18 months, adding four new cities to the metro map. The biggest gainers would be cities in BJP-ruled states, viz. Lucknow, Ahmedabad and Nagpur. Lucknow Metro would be the first off the block as it has received safety clearance and would be inaugurated within this month. Election-bound Gujarat would get its first 6.3 km stretch in the capital city Ahmedabad next month. These two stretches would be followed by 28.4 km stretch in Delhi and 28 km in Hyderabad in September.

By March 2019, just two months ahead of parliamentary elections, 19 new sections in nine cities would be commissioned, adding 313 kms to the 370 kms metro network. This translates to 313 kms made operational in 19 months as compared to 370 kms made operational over 33 years in eight cities since the first metro service began in Kolkata in 1984.

This is expected to be a major election pitch in urban centres. As per statistics provided by ministry of housing and urban affairs, there has been a 158% hike in budgetary provision for metro projects during the last three years over the previous three years under Congress-led UPA government.The budgetary provision between 2012 and 2015 for metro projects was Rs.16,565 cr, which has been increased to Rs.42,696 crore during 2015-18.