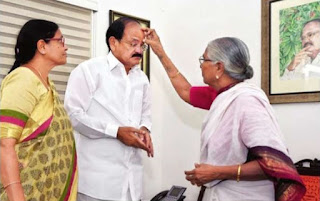 With Rajya Sabha and Lok Sabha members comprising the electoral college, Naidu was aided by an estimated 20 opposition MPs cross-voting in his favour and his margin of victory of 272 votes is the largest in the last 30 years.

Naidu will take oath of office on August 11. The term of incumbent Hamid Ansari, who held the position for two consecutive terms during 2007-2017, will come to an end on August 10.

With Ansari, who was a UPA nominee, demitting office, Congress has lost a significant perch in the Rajya Sabha. Naidu's election marks the current ascendency of BJP and its allies.

Naidu's win was immediately hailed by PM Narendra Modi and BJP president Amit Shah and other senior BJP leaders. Opposition leaders also congratulated Naidu on his success in the election. In an electoral college of 790 (545 from Lok Sabha and 245 from Rajya Sabha), 785 members were eligible to cast their votes.While two seats each are vacant in both the Houses, one Lok Sabha BJP MP , Chedi Paswan, is not eligible to vote due to a pending case of disqualification against him. Two BJP MPs, Vijay Goel and Sanwar Lal Jat, could not vote because they are in hospital.