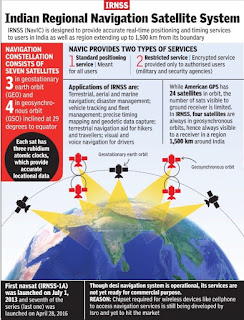 The launch of India's eighth navigation satellite, IRNSS-1H, on Thursday will open a new chapter in the country's history of space exploration as, for the first time, the private sector has been actively involved in assembling and testing of a satellite. Earlier, the private sector's role was limited only to supplying components. The 1,425-kg satellite is all set to start its voyage from the second launch pad of the Satish Dhawan Space Centre at Sriharikota, riding the Isro's trusted launch vehicle PSLV-XL.
A consortium led by Bengaluru-based Alpha Design Technologies successfully completed 25% of the development work of IRNSS-1H, under the guidance of Isro scientists.

Isro chairman A S Kiran Kumar said, “For the first time, a private company has been involved in the integration of a satellite. Progressively, we will involve more and more companies in satellite assembly activities.“

Alpha Design CMD, HS Shankar said the consortium had bagged the orders to build IRNSS-1I and work had already begun. The launch of IRNSS-1I is scheduled for April 2018.

On the private sector's role in the development of other spacecraft components, Kumar said, “Subsystems of the l payload and launch vehicle are already being developed in colf laboration with the industry .“

Incidentally, in another first, a crucial part of the development of IRNSS-1H happened at the newly-developed Isro space park in Whitefield. Isro felt the urgent need to launch IRNSS-1H after three atomic clocks of its first navigational satellite IRNSS-1A, launched in 2013, stopped functioning. These rubidium atomic clocks are meant to provide accurate locational data.

Tapan Misra, director of Ahmedabad-based Space Applications Centre, said, “We need to know the position of a satellite in order to find the position of an object on earth. And to find a satellite's position, we have to measure it with the help of time. To find the satellite's position with an accuracy of 0.5 metre, atomic clocks are therefore used for precise timing.“ When the time signal is missing, getting true positional accuracy becomes a problem. “Poor the accuracy of the atomic clocks, less the accuracy of distance calculated.“

Isro had imported 27 sophisticated timekeepers for the nine satellites of the Rs.1,420 crore Indian Regional Navigation Satellite System (operational name NaVIC -Navigation with Indian Constellation). Out of which, seven of the satellites are in the orbit and two of them are standby. NaVIC, which has become operational but is yet to be commercialised, has several significant applications.

The Isro chairman had earlier said, “The stopping of these atomic clocks has not affected the overall performance of our navigation system.“