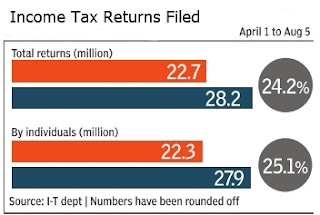 The government's demonetisation drive and the subsequent `Operation Clean Money' seem to have smoked out those avoiding taxes, resulting in a massive jump in the number of returns filed this year as well as individuals paying taxes.

The income tax department said that there was a 24% rise in the number of returns filed until August 5, the deadline, one of the highest growth rates in recent years. In all, 2.83 crore returns were filed by the extended deadline, compared to 2.27 crore in the same period last year, a rise of 24.2%. Last year, the growth was just a shade under 10%.

In the case of individuals, the increase was to the tune of 25.1%, with the number of returns filed estimated at 2.79 crore. This translates to a rise of nearly 56.5 lakh returns so far this year, with assessees having the option to file returns for a few more months without having to pay any penalty. The effect of demonetisation was also visible in the growth in direct tax collections, the income tax department said. Advance tax paid by individuals increased by close to 42% till August 5, while personal income tax through self-assessment tax saw a 34% rise.

While the department has so far focused on large cash depositors who did not have the requisite income to back up their deposits, those who had deposited up to Rs.2.5 lakh in old Rs.500 and Rs.1,000 notes have not been asked any questions. Government officers believe many people who had deposited large sums of cash either in their accounts or into those belonging to their family members are now filing returns to avoid any trouble.

Within five months of demonetisation, the government had managed to get 91 lakh new tax assessees. High levels of cash deposits also resulted in several individuals having to revise their returns. Between January and April, the department had identified over 18 lakh people whose bank deposits were not in line with their tax returns or identified sources of income. While several people had responded to the query posted in their online tax accounts, those who did not respond face action. In May , the government had said that it had identified at least one lakh “high-risk individuals“ with more than Rs.1.72 lakh crore deposits. Those with unexplained deposits of Rs .5 lakh or more during demonetisation have been put in this category.