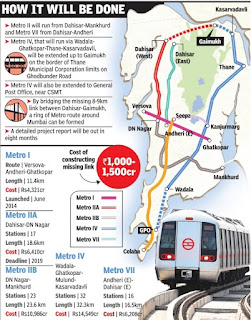 Extension of the Metro corridors from Dahisar to Thane is being planned to decongest the road corridor and suburban train corridors as this new connector will provide faster connectivity between the eastern and western suburbs.

Additional metropolitan commissioner Praveen Darade said they plan to link Dahisar to Gaimukh in Thane on Ghodbunder Road. Gaimukh is on the border of Thane Municipal Corporation limits on the west. MMRDA already has plans to extend Metro IV up to Gaimukh from Kasarvadavli.

Construction of this missing link between Dahisar-Gaimukh will ensure a ring of the Metro around Mumbai's neck.

Darade said, “The extension will cost around Rs 1,000-1,500 crore as we plan to use rolling stock of the under-construction Metro corridors. The route will have inter-operatability with other Metro corridors.“

A detailed project report will take at least eight months to prepare. MMRDA is proposing an elevated route via Ghodbunder Road. There are some hills but it will not be an impediment in constructing the corridor.

As of now, those who wish to travel from the eastern suburbs to the western suburbs have to travel to Dadar and then interchange trains from Western Railway to Central Railway and vice versa. The other option is to take the Metro from Andheri or Ghatkopar to travel to the CR or WR lines. The third option is via Ghodbunder Road or JVLR.