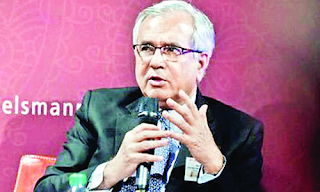 The Centre has appointed economist Rajiv Kumar as new vicechairman of Niti Aayog, opting for a home-grown technocrat to run the government's top policy think tank. He will take over from Arvind Panagariya, who is returning to Columbia University at the end of the month.

A senior fellow at the Centre for Policy Research, Kumar has been involved in the selection of finance sector regulators like the RBI governor and Sebi chief, and is seen to be in tune with the BJP's economic ideology. He was among a handful of economists to have backed demonetisation. Vinod Paul, a professor of paediatrics at AIIMS, has been appointed member of Niti Aayog. Currently, Niti Aayog has three members: Bibek Debroy, V K Saraswat and Ramesh Chand. Rajiv Kumar is also chancellor of Gokhale Institute of Economics and Politics in Pune and the founding director of Pahle India Foundation, a non-profit research organisation specialising in policy research and analysis.

The immediate task before the Aayog is to prepare a seven-year strategy paper and 15-year vision for the economy. In addition, it has emerged as the government's advisor on disinvestment and loss-making PSUs. The entity is also responsible for monitoring outcomes of ministries and is also involved with reworking the regulatory set-up for sec tors such as health and education. In Kumar, the government has opted to appoint someone who is seen to be well-versed with the way the it operates, having worked as the secretary general of industry chamber Ficci as well as the chief economist of its rival lobby group CII. He has also served as director & chief executive of the Indian Council for Re search on International Economic Relations, a think tank and worked on a book on the retail sector in the country. A section in the government was keen on someone who understands the nuances of political economy.

Kumar holds a D.Phil in economics from Oxford and a Ph.D from Lucknow University. He has also worked in the finance and industry ministries in the past.