Road from Ennore to Mahabs gets Centre's nod 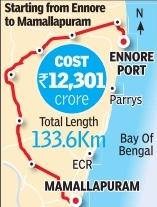 The department of economic affairs under the union finance ministry has sent its concurrence on August 10 stating that the project has been included in Japan International Co-operation Agency's annual plan.

About 50% of the project cost has been earmarked for construction and maintenance of roads, and the entire project has been divided into five sections. In order to improve Ennore Port's connectivity and make freight movement easy, the first phase of construction has been planned along North Access Road (section-I) which connects the port to Thatchur on National Highway 5.

According to sources, of the five sections, traffic density is the highest along section III connecting the industrial corridor in Sriperumbudur and Singaperumalkoil, located 25 km from Tambaram. Results of the recent cost benefit analysis report suggest the Annual Average Daily Traffic on the 24.85-km stretch was 28,297.As per the revised detailed project report, North Access Road and the stretch linking Mamallapuram and Singaperumalkoil will have two lanes of traffic in each direction, while the remaining sections will be 6-lane thoroughways.

All the stretches would have two-way service roads on both sides besides 2-3 metre footpaths or utility corridors (with drains). The initial plan proposed 22-metre-wide medians throughout the link road, but width was reduced to 4 metres in the final stage. Government reports suggest traffic is expected to increase by 13% to 19% on these roads in the next 10 years and more than 4 lakh vehicles, mostly multi-axle trucks, could be using the stretch daily by 2027.

Considering this, the state highways department reserved 60m-100m of space on either side of the roads so that they can be expanded if the demand shot up as estimated.

The state had earlier sought aid from Japan International Cooperation Agency for the project which would facilitate container movement from southern districts to Ennore Port. The Tamil Nadu Road Infrastructure Development Corporation has begun construction along the stretch, said a senior official from the state highways and minor ports department. “They were assigned the task of widening the connecting road to six lanes and only patch works are pending,“ the official said.