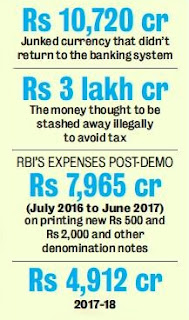 Almost all the 500 and 1,000 currency notes that were made illegal in November 2016 have returned to the banking system, the RBI said, prompting the Opposition to question the efficacy of demonetisation in curbing black money.

This meant just Rs.10,720 crore of the junked currency did not return to the banking system as against initial estimates of about Rs.3 lakh crore, which was thought to be stashed away illegally to avoid tax.

After the November 8, 2016, decision, the government gave a limited period window to first exchange any old currency in possession and then deposit them in bank accounts. Also, the junked currency was allowed to be used in utilities like buying petrol and diesel at petrol pumps, paying for hospital and electricity bills and fare on state road transport buses. The currency returned is a combination of deposits made in banks, notes exchanged and utility bills.