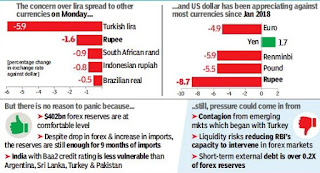 The rupee recorded its sharpest single-day fall since September 2013, with the dollar gaining Rs.1.1 on Monday, and closed at 69.93 — a new low. The rupee ended the day as the worst performer in Asia as the contagion from the collapse of the Turkish lira spread to emerging market currencies.

Dealers are at a loss to explain why a rout in the Turkish market would have a disproportionately large impact on the rupee. While the sensex did fall by 224 points to 37,645, the sentiment was not so negative to warrant a 1.5% fall in the currency. Some dealers said that there could have been a sudden demand from some banks who were squaring their positions in the forward market.

With the rupee only a few paise short of 70, analysts are forecasting that the dollar could soon hit 72. A weakening of the rupee would make oil imports more expensive and stoke inflation, prompting the RBI to hike interest rates.

Economists point out that the economy is in a far better shape when compared to August-September 2013.