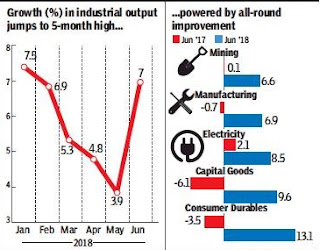 The country’s industrial output growth rose to a five-month high in June, powered by manufacturing, mining, electricity, capital goods and consumer durables sectors. The surge ignited hopes of a sustained revival in the crucial segment in the coming months.

Industrial output in June grew an annual 7%, accelerating from previous month’s upwardly revised 3.9% and a contraction of 0.3% in the year-earlier month.

The growth in April-June quarter was 5.2% compared with 1.9% expansion in the same period last year.

Economists said they expect the healthy growth to sustain.