Rahul on being a Gandhi 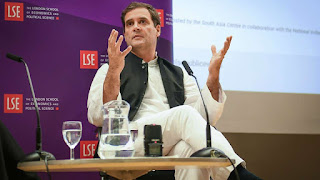 Congress president Rahul Gandhi said his family has not been in power since his father’s time, stressing that he should be judged on the basis of his capability.

The RSS, he said has “helped” him tremendously in developing as a political leader “by relentlessly attacking” him on every front.

On a question about his privileged background and that Congress is effectively being run by a family, Gandhi said: “First thing, my family has not been in power since my father was the prime minister. This is something that is forgotten.”

“Second, yes I am born in a family..listen to what I am saying, talk to me about issues, talk to me about foreign policy, economics, Indian development, agriculture openly and freely. Come to me with whatever questions you want, and then judge what I am.”

“It is interesting to me that the prime minister of India struggles to have this type of a conversation. He can’t sit here. He has never done it. And a large part of it, frankly is understanding of issues,” he added.

“I have been working for 14-15 years in the political system. I have taken a beating and have learnt a lot. I am person who listens, respects other people’s ideas. The most important thing to me is that I see through hate. And I really think, I am proud of that,” he said.

He further said: “But at the end. it’s your choice. Do you condemn me for the family I come from, or do you judge me based on my capability..that’s your choice. It’s up to you..not up to me.”