The new metropolitan commissioner is running against time: he aims to make the metro Mumbai’s longest public transport network in five years. That would mean surpassing Central Railway’s CST-Karjat line (122 km) and the Western Railway stretch linking Churchgate to Dahanu (123 km). The two add up to nearly 250 km of track length, but short of the 276-km mark that R A Rajeev hopes to conquer.

In scale and conception, the metro is touted as the future of travel. Its potential can be gauged from the fact that the 12 lines, on completion, would provide 250 stations for entry, exit and interchange—as opposed to the 100-odd stops on the suburban railway. Rajeev says, “By 2022, it will change the face of Mumbai.” Indeed, the consensus among planners is the metro will have a transformative effect, shaping development, intra-city commute and life on the street in ways that render the network a key determinant of traffic and the economy. Given that the existing 11.5 km Andheri-Ghatkopar line has a daily ridership of more than 4 lakh, prospects are bright.

The MMRDA has asked the state to appoint it as a Special Planning Authority with jurisdiction for a 500m radius around each of the stations that will dot the grid. “We have learnt from mistakes while constructing Metro One (the Andheri-Ghatkopar line). This area is being sought to ensure seamless travel and ease of movement…there will be pedestrian pathways, cycle tracks, easy movement for buses, autos,” said Rajeev. The financial burden of developing the zone around the metro will be borne by MMRDA and the urban local body. Many stations will be linked via skywalks to office hubs like Bharat Diamond Bourse in BKC, malls, or large facilities like the airport so that commuters do not spill out on the roads.

“We are benchmarking ourselves against Hong Kong and Singapore. We will appoint consultants for creating a separate operation and maintenance division for the metros,” he said.

That brings us to the staggering cost attached to it. Capital expenditure last year was Rs.2,700 crore; in 2018, it’s been budgeted at around Rs.5,000 crore. But that’s small change compared to what’s coming next. Initial civil work accounts for barely one-third of expenses on a metro. The bulk is yet to be spent on rolling stock, telecom, signalling, and electrical systems. “Expenditure will scale up from next year,” said the metropolitan commissioner. That’s putting it mildly—in all, MMRDA will need Rs.88,000 crore for 12 lines, nearly as much as what the Mumbai-Ahmedabad bullet train will cost.

“We have a balance of Rs.20,000 crore and land assets at BKC and Wadala worth Rs.95,000 crore,” said Rajeev. He hastens to add that MMRDA will not liquidate assets immediately; rather it has approached government to provide a steady source of revenue. 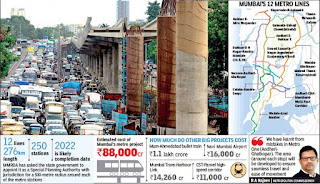 The authority has also sounded out multilateral agencies to raise funds. “We are in advanced discussions with Asian Development Bank for loans for lines VII (Dahisar-Andheri East) and IIA (Dahisar west-D N Road),” said Rajeev. MMRDA is also in talks with the New Development Bank for BRICS countries for Metro Lines II and VII.

The loans will have to be repaid over 25 years, which includes a five-year moratorium after the last instalment is received. MMRDA claims it is financially stable, but will need a constant source to supplement revenue from traffic.

As of now, it has been promised 1% of stamp duty earnings from property transactions in the region outside Mumbai. It may get a share of the Mumbai kitty as well but that requires an amendment in the BMC Act. Besides, it has sought a share of development charges levied in the city, including premium for extra floor space in the 500-metre area around metro stops.

Earnings will swell as lines are added—MMRDA expects daily ridership to eventually hit 50 lakh—but will ticketing cover costs? “If Delhi Metro with ridership of 25 lakh daily and minimum fare of less than Rs.10 can be profitable, so can Mumbai’s metro which will have more ridership,” says Rajeev.

Right now, he’s focused on clearing bottlenecks. Tenders for telecom, signalling, electrical works, and rolling stock are out for Metro lines 2A, 2B and VII. Nearly 60% of the civil work is complete on 2A and VII. Metro station work has also started, said Rajeev. “It is very difficult but we are trying to start Metro Line VII and 2A by December 2019,” he said.