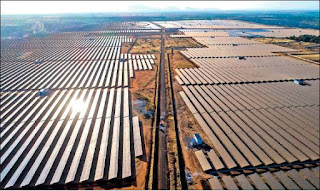 Less than a decade ago, Pavagada was a hotbed of Naxal activities. Two decades earlier, the taluk made news after a number of toddlers went missing, allegedly snatched from the front yards of their houses. The child-lifting was attributed to wolves on the prowl. Securing jobs in Bengaluru was the only viable route out of poverty.

But the solar park has changed all that. Locals have bagged various technical and non-technical jobs — right from installation of panels to monitoring — at the park.

To learn more about the transition one has to visit Thirumani village, about 30 km from Pavagada on the border with Andhra Pradesh. A vast swathe of dryland, the village is dotted with shepherds wandering in search of forage for their herds. As one walks down the kaccha roads of the village, large solar panels suddenly spring up, indicating that one has arrived at Shakti Sthala, the name of the solar park.

Spread over a staggering 12,700 acres across Thirumani, Kyathaganacharlu, Balasamudra, Valluru and Rayacharlu villages, Shakti Sthala’s story began in March 2015 with the creation of Karnataka Solar Power Development Corporation Ltd. The corporation is a joint venture between Karnataka Renewable Energy Development Ltd and Solar Energy Corporation of India. The park also happens to be part of Karnataka’s Solar Policy 2014-2021.

Interestingly, not a single acre has been acquired for the project. Instead, the government has entered into a 28-year lease agreement with farmers. Under the agreement, about 2,300 land owners are paid Rs.21,000 per year per acre they have shared for the park. The amount increases by 5% every two years. The best part is that farmers retain ownership of the land.

The lease model is believed to be the brainchild of G V Balaram, then managing director of KREDL, who also hails from Pavagada. Aware of the plight of farmers, Balaram’s idea of leasing land turned out to be a win-win situation for the project and farmers. Then energy minister D K Shivakumar also interacted with farmers at crucial intervals, bringing the project to fruition.

The solar park is divided into 40 blocks, each spread over 250 acres and capable of generating 50 MW. The blocks have been auctioned to solar power developers. Located on flat terrain which is blessed with excellent solar radiation, the park immediately had six developers on board for the first phase. These include Finnish clean energy firm Fortum Corporation, Adani Power, Tata Power Renewable Energy Ltd, Arrow Solar, ReNewer Power (50MW each) and ACME Solar. The developers have entered into power purchase agreements with electricity supply companies. Rameez Ul Rahman, operations and maintenance engineer with Fortum Corporation, said one of the blocks they have is fitted with over ₹ 5.4 lakh solar modules (plates). “The region is blessed with good radiation and we are happy to be part of the project,” he said.

Shivakumara Swamy, AGM, KSPDCL, said tenders have been awarded for the generation of another 1,250MW and the process of allotting the remaining 150MW is on.

“We would have commissioned the entire 2,000MW by the end of this year, but setbacks such as delayed auctions and legal complications pushed the deadline to next year,” Swamy said.

Currently, Karnataka has the capacity to generate about 24,000 MW of power through all sources including thermal, hydel and nuclear.

KREDL managing director D Nagaraj said, “With the solar park set to operate at full capacity from next year, Karnataka, which suffers from an acute shortage of power, will become a power exporter. From renewable energy alone, we plan to add between 750 MW and 1,000 MW to the state grid by March next year.”