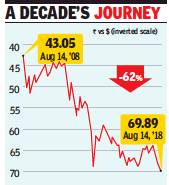 The rupee for the first time breached the 70-mark against the US dollar before recovering to close at 69.89 — four paise stronger than Monday’s close of 69.93. The milestone, however, did not cause any panic either in government or in the stock markets where the sentiment remained positive with the sensex gaining 207 points to end at 37,852. While opposition parties attacked the government, hitting back at the Prime Minister for his attacks against the UPA government in 2013 for the falling rupee, Congress chief Rahul Gandhi described the weakening to an all-time low of 70.10 as “a vote of no-confidence”.

However, government officials put on a brave face. Economic affairs secretary Subhash Chandra Garg said in New Delhi that India has sufficient foreign exchange reserves. However, because the rupee was weakening due to global factors, any move by the central bank won’t help much. He said that $23 billion of the country’s foreign exchange reserves have been used to defend the rupee.