Amid continuing price wars with Jio, Airtel gained a paltry 10,689 customers in June and No. 2 Vodafone India added about 2,75,000 customers. Idea Cellular, which is merging with Vodafone India to create the country’s largest telco, notched up the strongest gains among the older telcos with 6.4 million new subscribers.

Airtel had added almost 36 million customers in May following the integration of its recently acquired Telenor India operations. The company declined to comment on the latest subscriber numbers.

State-run Bharat Sanchar Nigam reported about 2,44,000 customer additions for a market share of 9.9%.

Visitor Location Register, a key metric reflecting the number of active subscribers on a mobile network, indicated that 99.8% of the users were active for Airtel, 93.5% for Vodafone India, 92.2% for Idea, 82.5% for Jio and 58.4% for BSNL.

And some more data from the recent past.... 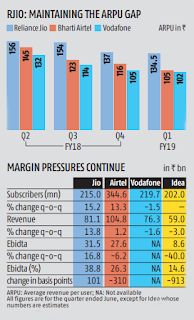