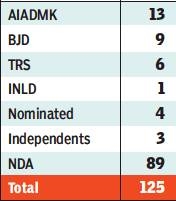 The opposition lost the perception battle over the election of the Rajya Sabha deputy chairman with NDA nominee and JD(U) MP Harivansh winning comfortably with 125 votes in his favour while Congress candidate B K Hariprasad polled 105, less than his full quota of votes.

While all NDA votes along with those of regional parties AIADMK and BJD were in order, with additions of lawyer Ram Jethmalani, representing RJD, and the lone INLD MP R K Kashyap taking the tally to 125, there were as many as 13 absentions and abstensions from the opposition. Three MPs from Congress, two from Trinamool Congress and one from SP did not turn up and DMK ranks were depleted too despite two MPs being brought to the capital by a chartered flight. Out of the effective strength of 244 members, 232 cast their votes as Jaganmohan Reddy’s YSRCP (2) abstained and AAP (3) and PDP (2) were absent.

The result was a setback for Congress, which had forced the showdown after regional parties in the opposition decided not to field a candidate. Congress said the decision to contest should be read in the context of its view that opposition to the Modi government’s policies had to be registered. However, gaps in the opposition benches were a blow to claims of a united front against BJP and the win also helped the party claim that the opposition’s stranglehold over the Upper House had been breached.

PM Narendra Modi congratulated Harivansh, dwelling on his career as a journalist and author, and described him as a “well-read” person who “has written a lot”. “He has served society for years,” the PM said in Rajya Sabha.

This was the second instance in recent weeks that the government has managed to ward off an opposition challenge, having won the no-confidence motion. The Rajya Sabha election hung on the BJD’s stance and the Odisha outfit backed Harivansh with its nine MPs.

While BJP now has its nominees as President, Vice-President and Lok Sabha Speaker, the RS deputy chairman is with an ally.

The successful vote also delivered the benefit of strengthening the political alliance with JD(U) in Bihar where the party has been at odds with BJP on several issues, the most contentious being seat-sharing for the Lok Sabha polls.