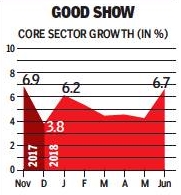 Growth in the country’s crucial core sector rose to a seven-month high in June on the back of a robust output in cement, coal and refinery segments, pointing to strong growth in industrial production data to be released later this month.