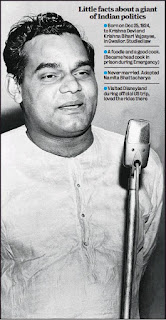 Former Prime Minister and Bharat Ratna Atal Bihari Vajpayee, hailed as one of India’s most charismatic leaders who led the nation through several crises and helmed a tenuous coalition, breathed his last at 5.05 pm at AIIMS, New Delhi, on Thursday after remaining on life support for 36 hours.

He was 93. The last rites will be held on Friday afternoon at the Rashtriya Smriti, adjacent to Mahatma Gandhi’s memorial Rajghat. “It is with profound grief that we inform about the sad demise of Former Prime Minister of India, Shri Atal Bihari Vajpayee, at 05.05 pm,” the AIIMS said in a statement.

The veteran leader, dubbed as the moderate face of BJP, was rushed to the AIIMS on June 11 with kidney infection, chest congestion and urinary tract infection. His condition deteriorated on Tuesday following which he was placed on ventilator. After Prime Minister Narendra Modi visited him at the AIIMS late on Wednesday evening, the hospital issued a statement, saying that Vajpayee was critical. Since Thursday morning, senior leaders across the political spectrum started flocking to the hospital.

The Prime Minister paid a second visit in the afternoon and spent close to 50 minutes there. BJP president Amit Shah and other members of the Union cabinet were also present.

Delhi CM Arvind Kejriwal, who also paid a visit to AIIMS along with his deputy Manish Sisodia, called off his birthday celebrations on Thursday. Congress president Rahul Gandhi also rushed to AIIMS after addressing a joint rally of the Opposition at Talkatora Stadium.

Much before the news of death came in, the BJP called off its national executive meeting and other engagements involving senior leaders. The Centre has declared seven-day mourning from August 16 to 22 during which the National Flag will fly at half-mast across India. The Tricolour will also fly half-mast on the funeral day in all Indian Missions and the High Commissions abroad. Apart from Delhi, the governments in Rajasthan, Odisha and Jharkhand also declared mourning today. Government schools, colleges and institutions will remain closed.

After embalming the body, Vajpayee’s mortal remains were taken to his residence where he will kept till Friday morning. He will be taken to the BJP office at 9 am. The funeral procession will start at 1 pm, and the last rites will be held at Rashtriya Smriti Sthal around 4 pm.

A bachelor, Vajpayee is survived by his adopted daughter Namita Kaul Bhattacharya.

Vajpayee’s first became prime minister in 1996, leading a shaky coalition whose members were suspicious of the BJP’s right-wing politics. It lasted for 13 days and collapsed after losing a vote of no-confidence. His second stint as prime minister was in 1998 when the NDA came to power but that lasted for just 13 months. Finally, the NDA with Vajpayee as PM returned to power in 1999 and was voted out in 2004. 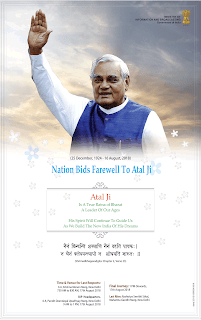