Core Sector Contraction Slows Down in May 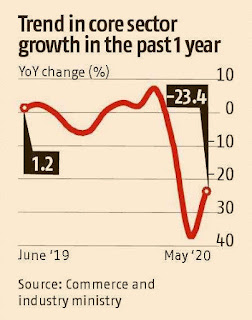 India’s infrastructure sector contracted at a slower pace in May compared with April, helped by the relaxation in lockdown restrictions and good growth in fertiliser production ahead of the sowing season.

The index of eight core industries dropped 23.4% in May from a year earlier; in April, the fall was 37%. Output contracted 30% in the first two months of the current financial year.

The eight industries in the index are coal, crude oil, natural gas, refinery products, fertiliser, steel, cement and electricity. These together have a 40% weight in the Index of Industrial Production, suggesting that industrial output may also shrink at lower pace in May. Ratings firm ICRA expects industrial production to shrink around 35-45% in May, compared with 55.5% in April.

Fertiliser production grew 7.5% after two consecutive months of contraction, suggesting some strength in the rural economy during the current kharif season.

The substantial relaxation in lockdown in June is expected to further help recovery in these sectors. However, given the fiscal constraints, government capital spending may remain mooted, which means recovery in steel and cement in particular is unlikely to be sharp. 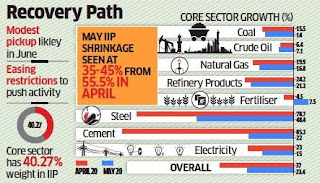