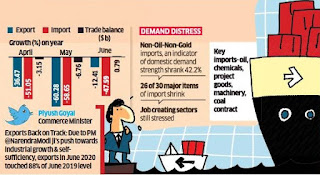 India registered a trade surplus in June, the first in almost two decades, as imports plummeted, raising concerns over the health of the domestic economy.

The previous trade surplus was in January 2002.

The decline in imports suggests tepid investment and consumption demand. India’s economy is forecast to contract up to 7% in FY21, according to some estimates.

In the first quarter of the year, exports fell 36.7% to $51.32 billion, while imports shrank 52.4% to $60.4 billion. India’s current account balance also recorded a marginal surplus at 0.1% of the gross domestic product in the quarter ended March 31 after a gap of 12 years.

The fall in exports was due to lower shipments of petroleum, textiles, engineering goods, and gems and jewellery. Iron ore, drugs and pharmaceuticals, chemicals and some agricultural commodities reported a rise, which helped limit the decline in exports.

Federation of Indian Export Organisations expects the full year contraction in exports to reach 20% in case of a second wave of the Covid-19 pandemic. As many as 26 of the 30 major items of imports contracted in June.