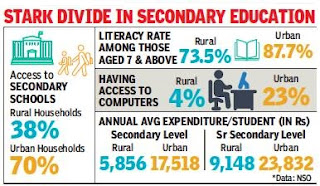 Right from literacy, accessibility to schools and household expenditure on education, the rural-urban gap remains significant.

There is a digital divide, too, with just 4% of rural households having access to computers as compared to 23% in urban areas. The rural-urban gaps in education are revealed in a survey conducted by the National Statistical Office.

While accessibility to a neighbourhood school at primary level is not an issue in rural areas, the gross attendance ratio is also satisfactory with nearly 100% of boys and girls in rural as well as urban areas attending classes. However, in sync with reduced accessibility, there is a gap at secondary level between rural and urban settings.

The all India literacy rate among persons aged 7 years and above is 77.7%. However, for the same age group, the rural literacy is 73.5% and in the urban areas it is 87.7%. The digital divide between rural and urban households is stark with just 4% of the rural population having access to computers. The report highlighted that while 15% surveyed population in the rural cluster has internet access, 42% of the surveyed students in the urban areas have access to the internet. Only 24% of the persons between age 15-29 years in rural areas are able to operate a computer as compared to 56% of their urban counterparts.

There is also a big gap in expenditure in education, especially at school level. Annual average expenditure per student at secondary and senior secondary level in a rural household stands at Rs.5,856 and Rs.9,148 respectively. An urban household for the same classes spends Rs.17,518 and Rs.23,832 respectively. As per the report, the average expenditure per student incurred during an academic session for basic courses was nearly Rs.8,331 for general courses and Rs.50,307 for technical and professional courses.