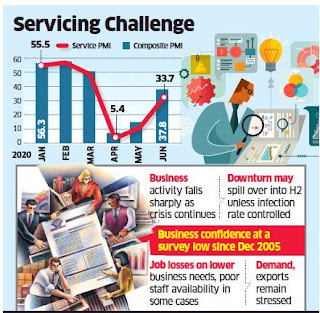 The IHS Markit Services PMI in June rose to 33.7 from 12.6 in May, indicating a pick-up from the previous month, although any reading below 50 on this survey-based index shows contraction. It stood at a record low of 5.4 in April.

The PMI for manufacturing released on Wednesday was better at 47.2 in June.

The Composite PMI Output Index, which measures combined services and manufacturing output, rose to 37.8 in June, up from 14.8 in May.

The services sector accounts for about 55% of the Gross Value-Added growth, two-thirds of total foreign direct investment inflows into India and about 38% of India’s exports.

“Although the downturn lost further momentum in June, it remained excessively strong as the Covid-19 pandemic curtailed intakes of new work and disrupted business operations,” IHS Markit said in the report.

The slower rate of decline was reflective of some stabilisation in activity levels, it said, with around 59% of firms reporting no change in output since May, 4% registering growth and 37% recording a reduction.

“Simply put, the country is gripped in an unprecedented economic downturn which is certainly going to spill over into the second half of this year unless the infection rate can be brought under control,” Hayes said.

As the country eased lockdown restrictions, some companies saw activity stabilise, but this is most likely just reflecting closures and temporary suspensions, according to the report.“While this will have contributed to a rise in the PMI figures, this certainly isn't a promising sign,” Hayes said.

New orders fell at a sharp pace in June, which firms attributed to reduced consumption habits and lower requirements. The survey pointed to yet another steep drop in export sales as restrictions related to travel hindered overseas orders.

Business confidence slid to a survey low since December 2005, pointing to strongly negative expectations towards activity levels in the year ahead.