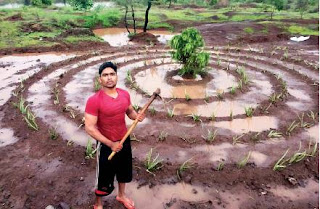 An 18-year-old has taken it upon himself to overturn the dry fortune of Gondavle village in Satara’s Mann taluka. The hamlet’s drought-prone nature has stuck with the teen, who, since two years, has been digging the mountains and land for watershed management. His efforts have produced stellar results — Gondavle has been able to conserve 1 crore litres of water; praise from villagers has cascaded upon the young adult thereafter.

Rohit Bansode’s efforts have simply not stopped here. He has planted 10,000 trees in the environs and even dug up a well, earning much respect from the hamlet. His efforts offer an inspiring lesson all the more if one takes a look at his background. His father is the only earner in the family and the money comes through odd jobs; they barely make ends meet.

Two years ago, an epiphany struck Rohit when he was watching a TV talk show hosted by Aamir Khan. Inspiration drove him to work towards turning reversing the drought-prone state of the village, even if it meant striving over eight hours in the field.

Rohit said, “There was not much that was being done in the village to deal with the water crisis. I thought, even if I start small, I will be able to bring some difference in the village. The day I decided to do so, I replaced the books in my bag with tools used for digging and a water bottle and there was no looking back after that.”

The first two days at the rough slope under the scorching sun gave him boils and fever. It did not deter him for the efforts continued and now, two years later, he has achieved what he had set out to do. “I have made patterns on the hills and people’s fields, where the water could be stored for a year. This will help farmers plan their agriculture activities accordingly,” he said.

Rohit starts his day at 6 am, goes to the hills to dig, returns at 2 pm for lunch and then again leaves at 3 pm to hills and to return by 7 pm. He asserts that there’s nothing else in the world that makes him as happy as this activity.

Inspired by Rohit, his younger sister Rakshita (15) also started tagging along, after initially trailing him simply and watching him from a distance. She now helps him plant trees.

Their father, Shankar, is proud of Rohit’s work. “I was worried for my son when he returned with boils and fever. But his perseverance has only given me a reason to be proud. No one compelled him to take up this activity. Rohit is made for bigger things in life,” he said.

Gondavale village’s sarpanch, Ajit Pol, called Rohit a “blessing” for the village. “He has done so much for all of us. The gram panchayat is low on funds and cannot do much because of the same, but this young boy has changed everything. The efforts are commendable and cannot be praised enough. There is a lot of water that is being stored and conserved now.”