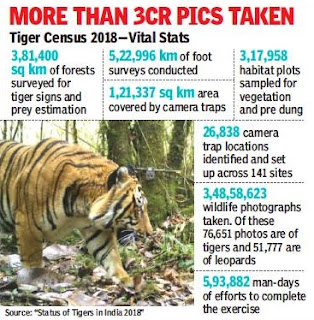 After recording a robust growth in the numbers of tigers in the 2018 Census, India recorded yet another feat by entering the Guinness Book of World Records for conducting what has been referred to as the “largest camera trap wildlife survey”, yet.

The fourth edition of the Tiger Census in 2018–19, was the “most comprehensive” to date, “in terms of both resource and data amassed”, Guinness World Records team said.

“Camera traps (outdoor photographic devices fitted with motion sensors that start recording when an animal passes by) were placed in 26,838 locations across 141 different sites and surveyed an effective area of 121,337 square kilometres (46,848 square miles). In total, the camera traps captured 34,858,623 photographs of wildlife (76,651 of which were tigers and 51,777 were leopards; the remainder were other native fauna). From these photographs, 2,461 individual tigers (excluding cubs) were identified using stripe-pattern-recognition software,” the Guiness team that announced India’s feat added.

Welcoming India’s entry into the Guinness World Records, Union environment and foresign minister Prakash Javadekar said, “We are happy that the proactive measures taken in the area of conservation and environment under the leadership of PM Modi have been endorsed formally and India has been lauded for conducting the most comprehensive survey yet.” In addition to the camera trap usage, India’s 2018 “Status of Tigers in India” assessment also conducted extensive foot surveys that covered 522,996 km (324,975 mi) of trails and sampled 317,958 habitat plots for vegetation and prey dung. It is estimated that the total area of forest studied was 381,200 km2 (147,181sq mi) and cumulatively the collection and review of data equated to some 620,795 labour-days.

The assessment was carried out over three phases, with the various datasets then combined to be extrapolated via statistical computation, which informed the final results published in the survey report. A positive outcome of the survey was that it concluded that India’s tiger population had increased by roughly one-third: from 2,226 in 2014 to 2,927 in 2018.