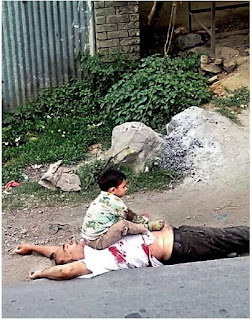 Days after a five-year-old boy was killed in a terror attack in South Kashmir, security forces rescued a toddler from the midst of a deadly gunfight in North Kashmir’s Sopore. The terrorists, however, killed his grandfather and a CRPF personnel, while three other jawans were injured.

Three-year-old Ayaad, a resident of Srinagar, was travelling to Sopore with his grandfather, Bashir Ahmed Khan, 65, on Wednesday morning when they were caught in an ongoing encounter between terrorists and security forces. Two men allegedly belonging to Pakistan-based terror outfit Lashkar-e-Toiba were hiding inside the attic of a mosque. They opened fired at a Central Reserve Police Force patrolling team a little after 8 am.

The CRPF personnel returned the fire but the terrorists managed to flee from the area, officials said.

Caught in the melee, Khan stopped his vehicle and was running for cover when he was struck by bullets. He reportedly died on the spot. Khan, a construction contractor, was to oversee the progress of one of his projects in Sopore and had taken along Ayaad for an outing.

Heart-wrenching pictures of little Ayaad wailing near his ‘daadu’s’ body went viral on social media triggering intense debate that Khan was pulled out from the car and killed by security forces, a charge denied by the CRPF.

Some CRPF personnel managed to extricate the boy as colleagues opened fire to cover them. They gave him chocolates and biscuits to console him.

A pall of gloom descended on the Khan household. “My father has been killed and those who killed him should be killed as well. Didn’t they see a little kid along with my father?” cried Khan’s daughter.

Senior Superintendent of Police, Sopore, Javaid Iqbal said that Khan was killed while trying to save his grandson.

CRPF head constable Deep Chand Verma, who was injured in the attack along with three of his colleagues, was declared brought dead to the hospital.

Inspector General of Police, Kashmir range, Vijay Kumar said the police recovered one full magazine and another one from which 30 bullets were missing from the mosque.

He identified the LeT men as Usman Bhai and Adil, a local resident.