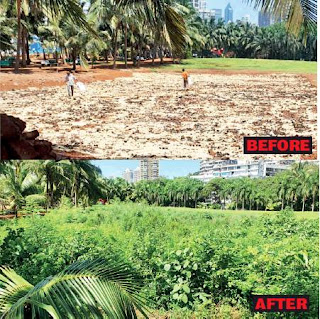 The BMC’s controversial Miyawaki urban forest project silently gathered evidence of its success during the lockdown. In the past six months, saplings have turned into mid-size trees, surprising even the activists who had raised a din over the civic body spending Rs.35 crore on planting trees in open spaces.

In December 2019, former municipal commissioner Praveen Pardeshi had appointed contractors to plant saplings using the Miyawaki concept in around 61 open spaces across the city. Opposition parties and some activists had claimed that this would further reduce city’s open spaces. Some others had criticised the BMC for undertaking such an expensive project in the midst of a severe fund crunch.

Six months down the line, Colaba woods, the 358 Tenement in Worli and expansive tracts in Malad and D-ward (near Priyadarshini Park) are some of the 100 budding urban forests that bear testimony to Pardeshi’s conviction. Pardeshi said the BMC had planted sustainable local species, and by next year there will be “more green emeralds” for Mumbai. “I had undertaken such projects in Pune and Pimpri Chinchwad as well. Now it’s mandatory for all private developers with plots over 4,000 sq mt,” he said.

Pioneered by Japanese botanist Akira Miyawaki, the technique ensures 10 times faster plant growth, resulting in 30 times denser plantation. The method has also been extensively used in and around Bangalore by corporate firms .

Activist Zoru Bhathena said it is a great initiative and more such plantations must be undertaken. Environmentalist D Stalin of NGO Vanashakti also lauded increasing the city’s green cover. “But it can’t compensate for a natural forest. It is an urban greening project,” he said.

Environmentalist Debi Goenka also feels it’s a novel approach to maximise the density of trees and increase oxygen levels. “It also makes for a good barrier against air pollution and noise pollution,” he said.

Believing that Mumbai’s open spaces deserve to be turned into mini forests, Bittu Sahgal of Sanctuary Nature Foundation said, “Our lives can be filled with bird song instead of traffic pollution and car horns. This is critical to the future of our children and will help Mumbai stay ready in the age of climate change.”