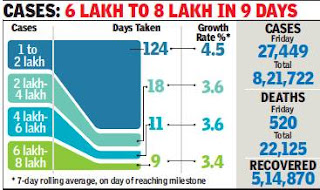 India’s Covid-19 caseload went past the 8 lakh mark just four days after having crossed 7 lakh, while the death toll topped 22,000 on Friday. Amid a major surge in the pandemic, fresh infections crossed 27,000 for the first time, the third record high in daily numbers in three days.

The day’s death toll from the virus crossed 500 for the first time in six days, settling at 520. This was the second highest single-day count of deaths after the 608 reported on July 4, discounting the 2,003 deaths reported on June 16 in a data reconciliation exercise.

In an indication of the worsening Covid-19 situation in Kerala, contact cases have started exceeding cases among returnees from abroad and other states in the daily tally. The state on Friday witnessed a massive surge of 416 cases, the highest single-day count so far, of which contact cases were 242 as against 174 among returnees.

CM Pinarayi Vijayan said there were three major clusters in these wards that have resulted in the super spread and there is every chance of a community spread.

As many as 1,347 new cases were reported in the past 24 hours in Uttar Pradesh, taking the Covid-19 tally so far to 34,131. This is the maximum number of cases in a single day. Official data reveals that the first 10 days of July have already seen 10,000 plus novel coronavirus cases, which is more than 50% of the cases recorded in June.