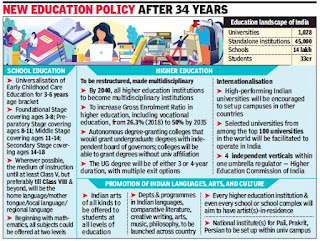 The Union cabinet gave its nod to a new National Education Policy 2020, thereby renaming the Ministry of Human Resource Development as the Education Ministry and bringing about ‘large-scale, transformational reforms’ in school and higher education sectors. The new policy replaces the 34-year-old NEP, which was implemented in 1986 and introduces structural, qualitative and quantitative changes in the overall education system in a bid to make learning more experiential instead of the existing stress on rote learning.
“Built on the foundational pillars of access, equity, quality, affordability and accountability, this policy is aligned to the 2030 agenda for sustainable development and aims to transform India into a vibrant knowledge based society and global knowledge superpower by making both school and college education more holistic, flexible, multidisciplinary, suited to the 21st-century needs and aimed at bringing out the unique capabilities of each student,” Union minister Prakash Javadekar said at a press briefing post the cabinet meeting on Wednesday.
The new policy is based on recommendations made by a panel headed by former Indian Space Research Organisation chief K Kasturirangan, who had submitted the draft of the new policy to Union MHRD minister Ramesh Pokhriyal Nishank when he took charge in May last year. Suggestions and objections were invited to the draft policy, following which two lakh responses were received by the ministry.
The existing 10+2 structure of school curricula will be replaced by a 5+3+3+4 curricular structure corresponding to ages 3-8, 8-11, 11-14 and 14-18 years, respectively. The age group of 3-6 years, which has been recognised globally as the crucial stage for development of mental faculties of a child, will be compulsorily brought under school curriculum. The new system will have 12 years of schooling with three years of Anganwadi/pre-schooling.
The new policy emphasises mother tongue/local language/regional language as the medium of instruction at least till Class V but preferably till Class VIII and beyond. “Sanskrit to be offered at all levels of school and higher education as an option for students, including in the three-language formula. Other classical languages and literatures of India also to be available as options. No language will be imposed on any student. Students to participate in a fun project/ activity on ‘The Languages of India’, sometime in Classes VI-VII, such as, under the Ek Bharat Shrestha Bharat initiative. Several foreign languages will also be offered at the secondary level. Indian sign language will be standardised across the country, and national and state curriculum materials developed, for use by students with hearing impairment,” read the official statement.
The policy aims to increase the gross enrolment ratio in higher education, including vocational education from 26.3 per cent in 2018 to 50 per cent by 2035 and add 3.5 crore new seats to higher education institutions.