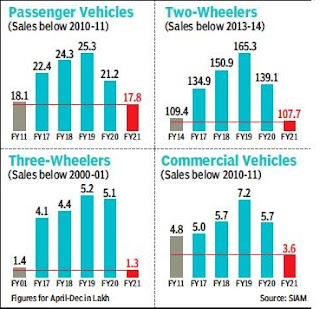 The auto industry moved in reverse gear during the nine months of FY21 as Covid-induced shutdowns as well as pressures on the economy and jobs saw sales of cars, two- and three-wheelers and commercial vehicles go down to historic lows.

According to numbers released by industry body Siam, sales of passenger vehicles — a cumulative of cars, SUVs, MPV/UVs — stood at 17.8 lakh units in April-December, the lowest in a decade since the 18.1 lakh units sold in the same period of FY11. Two-wheelers sales in nine months of this fiscal stood at 107.7 lakh units, lowest since 109.4 lakh units seen in 2013-14. Three-wheelers sales stood at 1.3 lakh units. In 2000-01, the industry sold 1.4 lakh units.

In commercial vehicles, the volumes stood at 3.6 lakh units (last lowest at 4.8 lakh units in fiscal year 2010-11), and contraction here clearly points out that the broader economy is still in deep trouble, and lacks confidence.