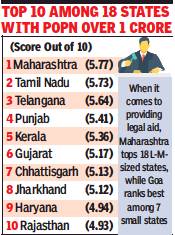 Maharashtra ranks first in the second edition of the India Justice Report 2020, that judges states on delivery of justice to people. Released on Thursday, the report said Maharashtra retained its number one position among 18 large and mid -sized states—each with a population of over one crore —followed by Tamil Nadu, which improved its ranking from third position in 2019, and Telangana, reports Swati Deshpande.

The IJR tracked the rise and fall in each state’s structural and financial capacity to deliver justice using the latest available government figures from budgets, human resources, infrastructure, workload, and diversity across police, judiciary, prisons and legal aid in 25 states.

Telangana showed the highest improvement in justice delivery and ranking as it rose to the third position from 11th in 2019 while another southern state, Kerala, slipped from second position in 2019 to fifth in 2020.