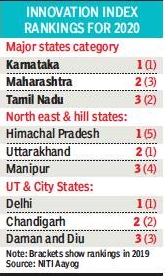 Karnataka has retained its top position among the major states, while Maharashtra has leapfrogged Tamil Nadu to occupy the second place in the second edition of the Innovation Index unveiled by government think tank NITI Aayog on Wednesday.

Among major states, the average innovation score is 25.4. Karnataka tops at 42.5, which is attributable to its strong number of venture capital deals, registered GIs (geographical indications) and ICT (information & communication technology) exports. Karnataka’s high FDI inflow has also enhanced the innovation capabilities of the state. Maharashtra follows second at 38, while Bihar finishes last at 14.5. The case for the southern states as the top performers has also become stronger as four of them occupy the top five spots within major states.

The northeast & hill states achieve an average innovation score of 17.9, with Himachal Pradesh as the best performer with a score of 25, followed by Manipur (22.8) and Sikkim (22.3), respectively. With 31.9% of its employment generated being knowledge-intensive, Himachal Pradesh benefits from a high number of knowledge workers, the report said.

The innovation score of UTs & city states averages at 26. Delhi, the best performer among all groups, tops the ranking. Chandigarh follows second with a score of 38.6, whereas Lakshadweep and J&K occupy the last two positions in the group, respectively. Having recorded the highest number of trademark and patent applications, along with the establishment of new startups and companies in the last fiscal, Delhi has managed to deliver superior results in the domain of knowledge output. Delhi’s performance is attributable to its conducive business environment, especially in terms of internet penetration, which is the highest in the country. Delhi has 202.7 internet subscribers per 100 population, according to the report.