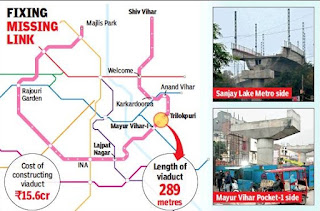 Delhi Metro’s longest corridor, Pink Line, which has been functioning as two separate corridors due to a “missing link” in Trilokpuri, will finally operate as one from March.

Delhi Metro Rail Corporation managing director Mangu Singh said that not only would the gap between Trilokpuri and Mayur Vihar Pocket-I Metro stations be bridged by March, but trains were likely to start running as part of trial runs.

“Physically, the gap will be closed by March, including the laying of tracks. Our attempt is to have train trials in that month through Trilokpuri,” Singh said. After trial runs, the newly constructed section would require safety approvals for starting commercial operations.

The 58.6km Pink Line from Majlis Park to Shiv Vihar is one of the most ambitious corridors built by DMRC. It is also known as the “ring corridor” as it functions as an arc, connecting all the existing Metro corridors.

Unavailability of land at Trilokpuri had meant that DMRC couldn’t construct a crucial stretch connecting Mayur Vihar Pocket-I to Trilokpuri station. As a result, while one section operates from Majlis Park to Mayur Vihar Pocket-I, with trains reversing back from the latter station, trains coming from Shiv Vihar return from Trilokpuri.

Trilokpuri is a densely populated residential area and land was needed for the construction of 10 pillars to build the viaduct. The occupants of 108 plots in Block-15 had to be relocated to make this land available. DMRC was able to relocate most of the occupants to flats it had built nearby.

The total length of the stretch on which work is currently on is 289 metres and pillars to support the viaduct had come up last year. Bridging this gap had been a huge challenge for DMRC till the last moment.

Though work is on at a war footing, the farmers’ protest at Delhi’s borders means that construction material coming from other states cannot reach the site on time. This includes fabricated steel girder, a major construction material coming from Punjab. The restricted movement at the borders has posed a small setback to the project, but DMRC is still confident of closing the gap by March.

Once the viaduct is complete, Pink Line would connect large parts of east Delhi with south and west. Also, DMRC has started construction work on the 12.58km Majlis Park-Maujpur corridor, which will turn the arc-like Pink Line into a complete circle. This corridor is a part of DMRC’s Phase-IV project and will also boast of the first cantilever bridge across the Yamuna.

Tenders for the missing viaduct were floated in 2019 and construction was expected to be completed within eight months at a cost of Rs.15.6 crore. While finding enough land took a long time, DMRC finally managed to provide housing to all the affected families last year.