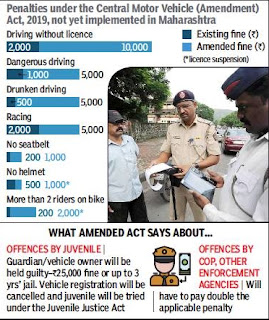 Motorists may soon have to cough up hefty penalties in the range of Rs.1,000 to Rs.10,000 and even face jail time for violations like driving without a licence or in an inebriated state.

State transport minister Anil Parab on Monday said that the government is likely to soon announce “increased fines” as per the Central Motor Vehicle Amendment Act, 2019.

The state will also procure 75 interceptor vehicles with speed guns that will be used by the RTO or police flying squads to nab speedsters in the act, he added.

“We also plan to stop new permits for taxis and autorickshaws in the state. Also a decision will soon be taken on fare hikes for autos and taxis in Mumbai region,” the minister said, adding that he has already corresponded with the Centre on the proposed amended penalties. “We have agreed to most of them; I will be travelling to Delhi to discuss some of the proposed penalties that may inconvenience the common man,” Parab said.

Sources said that those under discussion were Rs.1,000 fine for not wearing a helmet or seat belt.

Parab emphasised that hefty penalties related to serious violations like speeding and drunk driving (see graphic) were justified and may be implemented soon. The state government will take a call after his return from Delhi and notify the revised penalties, sources said.

The state government had put on hold the implementation of the Central Motor Vehicle Amendment Act for more than a year and did not notify the new fines in Maharashtra.

Penalty for speeding has been hiked to up to Rs.2,000 for light motor vehicles and Rs.2,000-Rs.4,000 for goods vehicles and impounding of driving licence for second/subsequent offence. Those driving without licence can face up to six months in jail and/ or fine up to Rs.10,000.

The amended Act also imposes fine on agents acting without proper authority from the RTO.

The state government will also set up 50 driver-training institutes in rural areas, Parab said. “The transport department will also make medical tests compulsory for commercial drivers. We are also setting up computerised driving-test tracks at RTOs across the state and automated fitness testing centres for commercial vehicles,” the minister said.