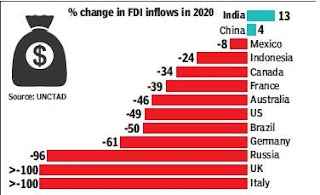 India witnessed a 13% rise in foreign direct investment to $57 billion in 2020 compared to the previous year. The domestic figure was boosted by investments in the digital economy, while China overtook the US as the largest recipient of FDI globally, according to an UNCTAD report.

India and China were the only two countries which saw FDI rising in 2020, while the rest of the world, including developed economies such as the UK and the US, saw sharp declines. This was revealed by the UNCTAD’s investment trends monitor’s findings.

India’s FDI inflows were propped up by acquisitions in the digital economy. The report said cross-border M&A sales grew 83% to $27 billion, a notable deal being the acquisition of nearly 10% of Jio Platforms by Jaadhu — owned by Facebook — for $5.7 billion. It also said that infrastructure and energy propped up M&A deal values in the country.

The Indian economy is staging a sharp recovery after plunging to record levels due to the impact of the strictest lockdown imposed to prevent the spread of the deadly Covid.

The report said China became the largest recipient of FDI, attracting an estimated $163 billion in inflows, followed by the US with $134 billion. It said that in relative terms, flows declined most strongly in the UK, Italy, Russia, Germany, Brazil and the US. FDI inflows to China increased by 4% compared to the previous year.

The pandemic triggered havoc across global economies and the report said global FDI collapsed in 2020, falling by 42% to an estimated $859 billion from $1.5 trillion in 2019. It said that FDI finished 2020 more than 30% below the trough after the global financial crisis. Flows to developed countries fell drastically by 69% to values last seen 25 years ago.

FDI in Asean — an engine of FDI growth throughout the last decade — was down by 31%.

UNCTAD said global FDI flows will remain weak in 2021. “The uncharacteristic immediacy of the FDI reaction to the crisis caused by the pandemic was due to physical lockdowns and other mitigation measures making the implementation of ongoing projects more difficult but the effects of the recession will linger and an FDI recovery is not expected to start before 2022. Investor uncertainty related to further waves of the pandemic and to developments in the global policy environment for investment will also continue to affect FDI,” the report cautioned.