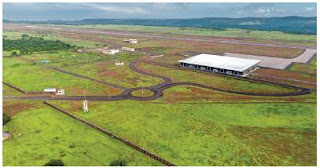 The newly built airport at Chipi will get operational later this month, possibly on the Republic Day.

The airport will give a fillip to tourism in the coastal district of Sindhudurg, which Maharashtra wants to develop as an alternative destination to Goa. At present, most tourists travel to Sindhudurg and nearby places by road or through Konkan Railway.

A ten-seater Falcon 2000 aircraft had conducted a trial run in September 2018 at the airport. The then Civil Aviation Minister Sunil Prabhu, who comes from Sindhudurg district, wanted the airport to start operations at the earliest, many formalities had to be completed.

Facilities for air travel are a must to attract quality tourists in large numbers from all over the world.

It is located close to the Mumbai-Goa highway and Malvan.

On completion and commissioning, Sindhudurg airport will be the first-of-its-kind in the south Konkan region, which will establish and enhance air connectivity of the region with western Maharashtra; southern states; Mumbai and subsequently to all regions of the nation.

Virendra Mhaiskar, chairman and managing director of IRB, said, “Infrastructure projects always bring along growth for the region in which they exist. Airports infrastructure is no exception. We are very happy and proud to be a part of the development of the region through this project. We are confident that this project will bring economic boom for the local people through various business and job opportunities.’’ In September 2020, a status report of the Directorate General of Civil Aviation showed that IRB Sindhudurg Airport Private Limited was advised to provide the current status on compliance of airport infrastructure, manpower and procedures. In reply of this, the company sought 45 days to complete the remaining work.

Further to expedite the licensing process, IRB Sindhudurg Airport Private Limited advised to demonstrate the airport preparedness for licensing in the month of October, 2020.

During discussion, the airport authorities were in process of getting airport rescue and fire fighting vehicles and fire watch tower was being readied and so was ATC tower Installation of MET equipment to provide the met information at airport is being completed. Marking on runway is required to be reviewed and corrected.

MIDC chief executive officer P Anbalagan said, “The developer is telling us that it will start operations by January 26. Sindhudurg has beaches that are as beautiful as Goa’s, and this will give a big boost to tourism. Bigger planes such as B 737 and A320 can also land here. Some formalities are left.’’

Maharashtra Tourism Development Corporation’s managing director Ashutosh Salil said that Malvan and Tarkarli are just an hour away from Chipi. Malvan has facilities for scuba diving and many other beach activities and this will give easy access to tourists, he said.