Covid-19: India is the only country with a single peak so far 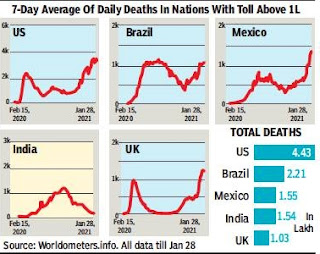 India completes one tumultuous year of Covid-19 on Saturday, with the virus outbreak appearing increasingly under control in most parts of the country with each passing day. It was on January 30 last year that India recorded its first case: a Kerala student who returned from Wuhan.

India has been recording fewer than 200 deaths per day for over a fortnight, while fatalities have been over 500 in at least eight countries. Four of them have been reporting over 1,000 deaths over the past few days, with the daily toll in the US hovering around 4,000.

The US has registered the most deaths, with the toll of more than 4.4 lakh till Thursday, as per data from worldometer.info. Brazil has the second highest toll at over 2.2 lakh. The UK is the only other country, in addition to Mexico and India, where the toll has topped 1 lakh.

With the exception of India, all the other four countries with a Covid toll of over 1 lakh are currently witnessing over 1,000 daily fatalities.

While India led the world in daily Covid case counts from late August till October last year, it has since fallen to the eighth spot. The seven-day rolling average of daily cases in India is currently around 13,500, lower than the averages in the US, Brazil, Russia, the UK, France, Spain and Mexico. Two other countries, Indonesia and Portugal, both seeing a spike in infections, are likely to overtake India in the next few days.

In the last 24 hours, India recorded over 13,000 fresh cases and at least 133 deaths. While the pandemic has certainly receded in the country, it is not over yet, as several experts have repeatedly pointed out.