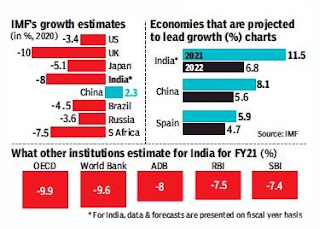 The Indian economy is estimated to post a narrower contraction of 8% in the current financial year but is projected to report double-digit expansion next year as well as in 2022-23, the International Monetary Fund said.

IMF, which released its update to the World Economic Outlook report, projected the Indian economy to grow by 11.5% in 2021-22 and 6.8% in 2022-23 as the economy gathers momentum after arrival of the vaccine and pick-up in economic activity. For the next two years, India is projected to be the fastest growing major economy, displacing China, which is estimated to grow by 8.1% and 5.6% in the next two years.

The IMF update forecast a narrower contraction for the Indian economy in 2020-21from the previous estimate of a decline of 10.3%. China is estimated to grow by 2.3% in the current fiscal year, the only major economy to post expansion. IMF’s estimate of contraction for 2020-21 is higher than the 7.7% decline estimated by the country’s statistics office and 7.5% fall projected by RBI.

The Indian economy was hit hard by the strictest lockdown in the world to stem spread of the Covid-19 pandemic. It is estimated to post the sharpest contraction since data began to be published in 1952.

Since lifting of the lockdown, the economy has posted a sharp recovery, propped up by pent-up and festival demand. After posting a record contraction of 23.9% in the June quarter, the economy scripted a recovery to post a narrower contraction in the September quarter. Various agencies estimate growth to return in the third and fourth quarters as several sectors of the economy touch pre-Covid levels.

IMF said although recent vaccine approvals have raised hopes of a turnaround in the pandemic later this year, renewed waves and new variants of the virus pose concerns for the outlook.