Chennai has more CCTV cams per sqkm than London, Beijing 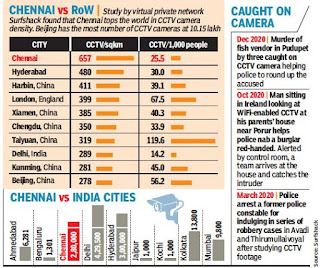 Chennai leads the world in terms of CCTV camera density. The city has the highest number of CCTV cameras per sqkm according to a recent study of 130 populous cities in the world by virtual private network service provider Surfshack.

Chennai has 657 CCTV cameras per sqkm, which is followed by Hyderabad that has 480 per sqkm.

Chennai, however, has lower number of CCTV cameras (2.8 lakh) overall when compared to Hyderabad (3 lakh), Beijing (10.1 lakh) and London (6.6 lakh), which feature in the top-10 cities in the world in terms of CCTV density.

The spurt in CCTV numbers in the city was in the past three years as part of the government’s ‘third eye’ campaign aimed to bring the entire city under CCTV cover. Chennai police have been advocating installation of CCTV cameras by roping in residents’ welfare associations, traders’ associations and business enterprises.

According to the official, CCTV cameras act as a deterrent and help in tracing suspects in chain-snatching cases. In August-September 2020, more than 60 snatchers have been tracked down by CCTV cameras.

Chennai police commissioner Mahesh Kumar Aggarwal said CCTVs help in maintenance of law and order, and traffic. “Now there are only standalone cameras where we collect footage and use it in solving a crime. Soon a live streaming facility will be added and help in prevention of crime. A command-and-control centre will be established where we will be able to receive alerts whenever there is a fight happens or snatching,” he said.

Residents have supported CCTV revolution. “It has made the public feel safer. Most countries are using CCTV cameras as a tool to keep crime in check,” said V Sandhya, a resident of Anna Nagar.

However, several residents said in some neighbourhoods, CCTV cameras are a showpiece and are not maintained by police. Aggarwal said chief minister Edappadi K Palaniswami has emphasised on the maintenance of these cameras and the state government has sanctioned funds.