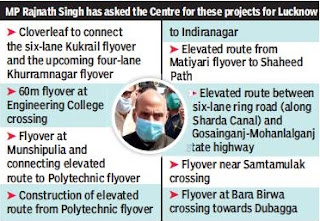 With the approval of eight road infrastructure projects for Lucknow by the road and transport ministry and the state government, people will be able to move through Sitapur Road, Faizabad Road and Gomtinagar areas with ease.

These projects include four flyovers, three elevated roads and a cloverleaf.

After inaugurating the Tedhi Pulia flyover on Friday, defence minister and Lucknow MP Rajnath Singh said that all-round development would ensure a place for Lucknow in top three cities in the country.

He requested the Union road and transport minister Nitin Gadkari, who was also present on the occasion, to grant approval to several other projects proposed by him.

In response, Gadkari said: “Rajnath ji, I have already approved all the projects proposed by you before stepping on the aircraft for Lucknow.” This drew a thunderous applause from the crowd.

According to estimates, over a lakh people travelling into and outside the city through Sitapur Road will enjoy hassle-free ride once the network of flyovers and a cloverleaf proposed in the area gets constructed.

The Tedhi Pulia flyover (2.2 km) on this route was opened for the people on Friday.

The foundation of second flyover (5.05 km) on this route at Khurramnagar was also laid. The third flyover (1.8 km) at IIM Crossing had been approved earlier and construction work will start soon.

The fourth flyover (60 metre) proposed at Engineering College crossing and cloverleaf near Khurramnagar flyover was also approved on Friday.

Once all these projects are operational, a person entering the city will be able to move easily towards the main city through IIM Crossing flyover to Khurramnagar flyover, Tedhi Pulia flyover and Engineering College flyover.

Those who have to go to Indiranagar (Sector 25) and Gomtinagar will be able to take turn from the cloverleaf near Khurramnagar flyover towards Kukrail flyover towards Gomti Barrage and further towards Lohia Path without meandering through the roads within the city.