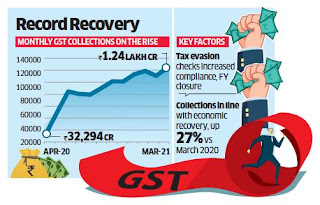 GST revenue crossed the ₹1 lakh crore mark for the sixth straight month and with a steep increasing trend over this period indicate rapid economic recovery post-pandemic, the finance ministry said in a statement on Thursday.

Collections in March were 27% higher than a year earlier, while they increased 14% in the January-March quarter.

Revenue from GST had declined 41% and 8% on-year in the first and second quarters of FY21, respectively, after the Covid-19-induced slowdown. Collections grew 8% and 14% in the following two quarters, indicating a recovery in both GST collections and the economy.

Revenue from imports was 70% higher in March and from domestic transactions was 17% higher.

“Increase in collections on imports, accompanied by the increase in domestic transactions, would indicate that the overall production/ consumption cycle is back to normal,” said MS Mani, a senior director at Deloitte India. E-way bills and electronic invoices also show clear signs of economic recovery.

The upward trend in GST over the past few months emerged due to closer monitoring of fake billing, deepdata analytics from multiple sources including GST, income-tax and customs IT systems and effective tax administration.

In addition to improved GST collections over the past six months, the major states reported a significant increase in March from the previous year. Haryana, Delhi, UP, Gujarat, West Bengal, Maharashtra and Telangana have shown up to 25% growth in revenue.