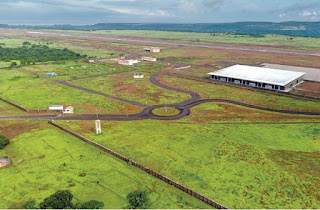 The opening of the newly built airport at Chipi in Sindhudurg will get delayed as the director general of civil aviation has said that repairs to the runway are needed before it starts functioning. The state government had earlier planned to inaugurate the airport on Republic Day but later switched the date to March. The Arun Kumar, DG of Civil Aviation, said, “They (the government) have to repair the runway and ensure it conforms to the safety standards prescribed.’’ The airport will give a fillip to tourism in the coastal district of Sindhudurg, which Maharashtra wants to develop as an alternative destination to Goa. At present, most tourists travel to Sindhudurg and nearby places by road or through Konkan Railway.

A ten-seater Falcon 2000 aircraft had conducted a trial run in September 2018 at the airport. The then Civil Aviation Minister, Sunil Prabhu, who comes from Sindhudurg district, wanted the airport to start operations at the earliest, but many formalities had to be completed.

A spokesperson of the IRB Sindhudurg Airport Private Limited said, “Work on the runway is underway in consultation with and under the guidance of professional experts and various authorities as well those involved in project development. Once completed, the same would undergo rigorous testing and after that the DGCA would be informed.’’