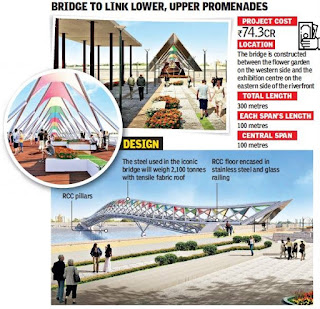 It may not be a Buckminster Fuller’s geodesic design, but it imbibes its intricacies — a system of triangular forms linked together in such a way that it distributes stress and weight in the most economical way. That’s the Sabarmati Riverfront foot overbridge, which is now nearing completion. The project began around March 2018 and was to be completed in 18 months.

“We lost time due to the pandemic. But we are hopeful that a significant portion of the work will be over by middle of this year,” says a senior official of the Sabarmati Riverfront Development Corporation Limited.

The pedestrian bridge is constructed between the flower garden on the western side and the exhibition centre on the eastern front of riverfront. “Each of these steel pipes have to be first set and welded in a triangular shapes such that there is equal weight distribution. The joints are an engineering marvel,” says the SRFDCL official supervising the construction of the pedestrian bridge. “The bridge will connect both the lower and upper promenades of the riverfront on both the banks of the riverfront,” the official added.