Travel across Mumbai in water taxis, ferries from December 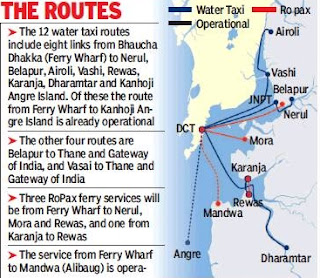 Water taxis and RoPax ferries will soon be a part of Mumbai’s public transportation system.

The 12 water taxi routes include eight links from the domestic cruise terminal to Nerul, Belapur, Airoli, Vashi, Rewas, Karanja, Dharamtar and Kanhoji Angre Island. The other four routes are Belapur to Thane and Gateway of India, and Vasai to Thane and Gateway of India. The ministery said that three new RoPax services will be from Ferry Wharf to Nerul, Mora and Rewas, and one from Karanja to Rewas.

Currently, roll-on and rolloff passenger service from Bhaucha Dhakka (Ferry Wharf) to Mandwa (Alibaug) is operational and this has reduced the 110 km road travel to about 18 km by using waterways. The ministry said using the RoPax services, people can cover this stretch in just one hour, instead of the earlier 3-4 hours.

“After the huge benefits being reaped of this ferry service, similar services are planned to be made operational at various other routes in Mumbai,” the ministry said.