Asia’s finest grassland in Kutch gets new lease of life 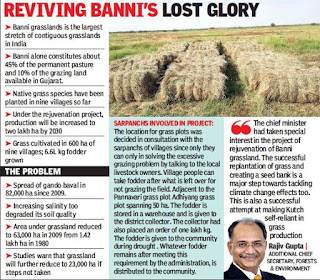 Banni, one of the finest grasslands of Asia, ravaged by the menacing ‘gaando baval’ (prosopis juliflora), increasing salinity and climate change over the years, is set to regain its lost glory.

The Gujarat Ecological and Education Research Foundation has successfully implemented a pilot project to rejuvenate the grassland spread across 2,500 sqkm area and also help resuscitate livelihood of the Kutchi cattle breeders. Around 600 hectare (ha) land in arid Kutch has been rejuvenated and blossoming with grass now!

The foundation started work under the National Fund for Climate Change project in 2018 and has so far created a seed bank of 38 native species over the period of last two years with the help of local cattle breeders. According to various researches, the grassland productivity has dipped to a mere 620 kg in 2009 from the 4,000 kg per hectare yield in 1960. The area under the grassland too got reduced to 63,000 ha in 2009 from 1.42 lakh ha in 1989, according to the report. A study finds that the major threat to the pastoral economy is also from uncontrolled livestock grazing and if the current condition continues, the area under grassland is feared to decrease by 23,000 ha land by 2030. The result is destruction of many indigenous species of grass. The GEER Foundation has started re-cultivation of native species of grass.

Director of GEER Foundation, RD Kamboj said, “We came up with the idea of creating a seed bank where we could provide native grass seeds to the entire banni region. Under this project, plantation has been done in 600 ha in nine villages of Banni. We collected 6.69 lakh kg of grass, of which 3.46 lakh kg was collected by the villagers.”